Although it may not appear as the same type of motorcycle that we see cruising the streets today, German engineer Gottlieb Daimler created the first ever motorcycle in 1885.

From 1848-1862, Daimler gained experience in a factory as a gunsmith. Ten years later his 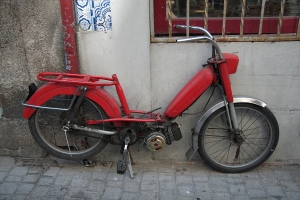 interests shifted into that of internal combustion engines, causing him to join Gasmotorenfabrik Deutz, where he worked as a technical director. During his time at Gasmotorenfabrik Deutz, he teamed up with Nikolas Otto, who pioneered the 4-cycle engine, and Wilhelm Maybach, who agreed with his opinion that steam engines were a thing of the past. They were encourage to produce an exceptional gasoline engine.

The Otto 4-cycle engine began commercial development in 1876. Because Daimler and Otto began having disagreements on production, Daimler and Maybach decided to branch off into their own production.  By 1881 they opened a factory where they began creating internal combustion engines which were light weight and high speed.

After many trials, and many failures they finally developed a single cylinder engine which operated better than the engine Otto had created. During the same year of 1885 in which they patented the design, they mated their engine with a bicycle created the first ever motorcycle in the world.

From there, others saw Daimler and Maybach’s invention, and branched out from there. Over time the idea of a motorcycle expanded and lead to the stunning and phenomenal motorcycles that we have today.