1953, the year Yamaha Motor Company’s first president, Genichi Kawakami spoke the words “I want to carry out trial manufacture of motorcycle engines.” And that he did.  Making use of machining equipment designed to make propellers for aircraft, Genichi found a way to look for the company’s next area of business.

In his attempts to expand the Japan based Yamaha Corporation, Genichi produced a variety of products such as auto parts, sewing machines, scooters, and three wheeled vehicles. But, after looking at the competitive market, his main focus became motorcycles. During his research and product endeavors, Genichi traveled overseas to visit the United States many times.

Because Genichi did not want to enter the US market unprepared with a business he himself was still quite unfamiliar with, he decided to reach out to German factories first. He joined a European tour which taught him to build motorcycles. After the tour and much research, he decided he was ready to jump into the market, even if it was a little late.

In August of 1954 Yamaha’s first model had been completed, called the Yamaha YA-1, powered by an air cooled , single cylinder 125cc engine, 2 stroke. Upon completion of the first prototype, Yamaha Motor Co., Ltd was founded on July 1, 1955, housing 274 employees, building 200 motorcycles per month.

To test their product, Yamaha entered their first model into two of the biggest Japanese races in the country. They won multiple classes in the various races confirming the superior quality they had hoped for. This allowed them to begin production of the YC1, their second model. This motorcycle was a 175cc single cylinder two stroke engine, followed by the YD1, a 250cc, two stroke twin.

After bringing their motorcycles to the USA, 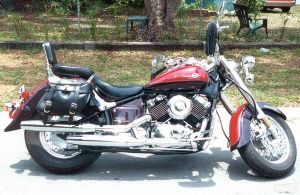 and becoming the first Japanese maker to enter an international race at the Catalina Grand Prix where they placed 6th, their business took a turn for the best. After fans saw the quality performance Yamaha was able to begin marketing their motorcycles in California in 1958.

From  1958 on, Yamaha designed more and more models of motorcycles including the creation of a whole new category of riding, what today would call “trail bikes”.  Trail bikes became huge in the United Sates because they were dirt friendly. The 1968 off road model DT-1 is what put Yamaha On/Off Road motorcycles high on the list in the USA.

Over the years Yamaha continued to grow, and is still growing with their production of race kart engines, snowmobiles, ATV, watercraft, and other non motorized products. The headquarters for Yamaha stands in Cypress, California since 1980.