For over 100 years the term “Hog” has been associated with Harley Davidson and motorcycle culture as a whole. Though the story of how the term came to be isn’t common knowledge. We here at SellUsYourBike.Net did a little digging and thought we’d share what we found! Even if you’ve never thought about why your “hog” has its name, we can help you sell it!

Here at SellUsYourBike.com we are always in the market for buying used Harleys. We buy Harley Davidson motorcycles from all over the country every day from Harley Heavy places like Iowa, North Dakota, Florida, and California! If you’re trying to sell your used Harley Davidson we’ll buy it off you! Simply fill out our free online quote form, and we’ll tell you how much you can get for your used Harley! 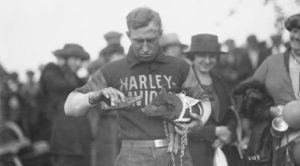 Here we see “Johnny” the Harley team’s mascot circa 1920

After WW1 men coming back from the war were buying motorcycles in droves. Each of the large motorcycle manufacturers needed to stand out from the rest. The only way to do this was by winning races with their teams. For Harley Davidson Labor Day weekend 1919 in Marion, Indiana HD established its legacy.

The Harley team dominated most of these races in the early 1920’s against their rival Indian. Ray Weishaar can be given the credit for the name after winning the races at blistering 70mph (a record at the time). Ray had adopted a piglet “Johnny” and it became customary for riders to take the hog for a victory lap after a win. Also, reporters took the teams mascot and made jokes about how the Harley Davidson team would “Hog” all the wins from the competition. This team mascot is why they eventually became known as the “hog boys,”.

Eventually, the term “hog” became the popular term to call any Harley-Davidson motorcycle. As time passed, the company not only embraced the name but also uses it for their own club. Now “HOG” is used as an acronym for the Harley Owners Group as well as the Harley-Davidson Motor Company’s listing on the stock market.

No matter what town you ride your Harley motorcycle, and no matter what you call it, if you’re selling it we’ll buy the old “Hog” off you. Finally, just fill out our quote from here, and we’ll take care of the rest!

Posted In: Racing, Sell My Motorcycle, Sell Us Your Bike